Square 56:
a. Low wide barrow, often ploughed over.
b. Bowl-shaped barrow.
c. Fine, tall and large bell-shaped barrow.
d. Fine, tall and large bowl-shaped barrow, opened at top.
e. Very large, tall, magnificent bell-shaped barrow - perhaps the finest in North Wilts. Hoare found burnt bones in an oblong cist, and a small cup of soft clay.
f. and g. Twin barrows enclosed by one ditch, both opened at top. Merewether failed to find anything apart from "the usual sort of fragments."
h. Very near the trackway, a remarkable square enclosure described by Stukeley as a "Druids House."
i. Tall bowl-shaped barrow with ditch, not opened.
k. Tall bell-shaped barrow, probably not opened.
l. Tall bell-shaped barrow with ditch. Smith suggests it may have been one opened by Thurnam in 1857. Several projecting sarsens were removed, revealing the skeleton of a small horse with iron shoes and 3 or 4 urns of burnt bones. There was the skeleton of a young child and another crouched skeleton, perhaps of an aged female. Reported in WAM, Vol. vi, p. 331, No. 24.
m. Large and high bell-shaped barrow with ditch and a few sarsens lying at its foot. Possibly the barrow where Thurnam found nothing but a tine of deer's horn; he later heard that years earlier, "nearly a bushel of burnt ashes" was found under a sarsen stone in the barrow. Ref. as above, p. 332.
n. Several sarsen stones - one small cap-stone on three very small supporters, surrounded by a low mound of earth. Perhaps a small cromlech.
o. Disc-shaped barrow of noble size, with unusually large bank and ditch.
p. The Ridgeway.

Square 58:
a. Silbury.
b. West Kennet long barrow.
c. West Kennet Avenue.
d. The Roman road.
e. Mouth of the tunnel into Silbury, dug in 1849 by the Archaeological Institute.
f. The spot where Mr Ferguson dug for the Roman road in 1867.
g. Places where the Wilts Arch. Soc. dug for and found the Roman road in 1867.
h. The spot where AC Smith found a Roman "kitchen midden" in 1867.
i. Apparently a Roman well; various artifacts found by the Cunningtons in 1882. 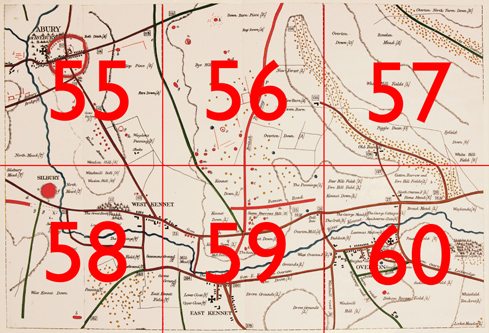