Square 28:
a. Very small square enclosure surrounded with low bank and ditch, with the appearance of a well in the centre. Object unknown.
b. Broken ground and pits in connection with the above.
c. Banks and ditches communicating with the enclosure a, extending a great distance.
d. Low bowl-shaped barrow. No ditch; not opened.

Square 29:
a. A Mound. Dean Merewether, who opened the four mounds in Yatesbury, doubted it was a barrow. Many bones of ox and smaller animals (the hare, in particular) were found, with pieces of iron and part of a key. No burial.
b. Very wide-spreading barrow, originally 20 feet high, but cut down for agriculture and gradually becoming more levelled. Merewether found a black substance, apparently burnt straw, and a cist containing an unusual quantity of burnt bones. These had been deposited in the hollow of an oak tree, with a piece of the cleft wood placed over it. The wood measured 4 ft by 2½ ft and was 18" thick. On top of the bones was the bronze blade of a hunting spear.
c. Another wide barrow, similar to the above and now flattened and spread widely. When Merewether opened it in 1849 he spoke to a labourer who had lowered the barrow in about 1833. The man described finding "a kind of metal box some 3 or 4" in length". The box had a lid and chain attached. He also found some beads, a knife and two skeletons. Merewether found little: a black substance like burnt straw, numerous bits of bone and pottery, and a cist containing "a considerable quantity of burnt human bones."
d. Round bowl-shaped barrow in the centre of the village. Smith felt this was a barrow but Merewether did not: it was made of a clayey soil, different to the barrows on the hills. Smith declared that this was simply the local material to hand.
e. Banks, trenches, mounds and much broken and uneven ground.

b. Another earthwork, square, deep, pond-like, with the corners cut away.b. Buried from sight, but not far from the surface, large sarsens occasionally caught the ploughshare, so each stone was hauled out of the field using a team of horses. They were found to covering stones of graves: nine were opened in 1854.

Square 30:
a. Windmill Hill.
b. Large bowl-shaped barrow, somewhat flat on the top, where there is a hole. Smith reports that seven skeletons and "a very beautiful little grape urn" were found when the barrow was levelled for agriculture.
c. Large bowl-shaped barrow, opened at the sides and top.
d. Large barrow, very wide.
e. Large bowl-shaped barrow, half ploughed over; opened at the top.
f. Barrow, very wide and low, on arable land and almost obliterated by ploughing.
g. Large barrow, very low and wide, almost ploughed out. Opened in 1849 by Merewether, who found a small plain urn containing the unburnt bones of a child and a crouched adult skeleton.
h. Large barrow, very wide and low but not ploughed. Merewether found no burial, but sherds of pottery; part of a human skull; teeth of a dog or fox, a boar tusk and a finely-worked arrow-head.
i. Beautiful little disc-shaped barrow with a wide ditch, not opened.
k. Another disc-shaped barrow, surrounded by a trench. No mark of opening.
l. Large wide barrow, almost flattened from ploughing.
m. Very wide low barrow, almost ploughed out.
n. Wide low barrow with a grass footpath over it. Almost ploughed out.
o. Very large, wide-spreading barrow, fast disappearing under the plough.
p. Very low barrow of small size, almost ploughed out. 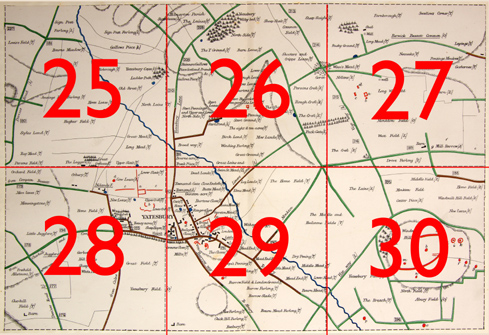