Square 43:
a. "This square mile, having long been under the plough, contains no traces of early occupation."

Square 45:
a. The Ridgeway.
b. Very indistinct barrow in a circular plantation.
c. A similar flat barrow.
d. Remains of a square earthwork, much cut away.
e. A square or oblong enclosure.

Square 46:
a. Two banks and a broad ditch - perhaps an old road.
b. Very irregular mound, probably a barrow.

Square 47:
a. The Ridgeway here takes a south-westerly direction.
b. Oblong or nearly square enclosure with bank and ditch. Is it one of the "Druids Houses" mentioned by Stukeley?
c.. The Ridgeway again. 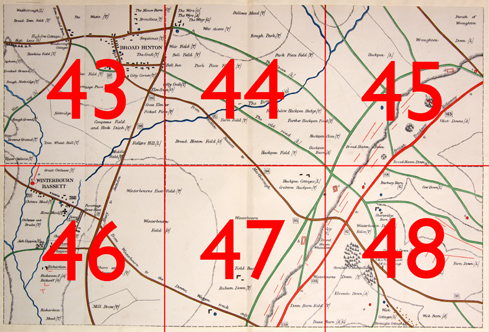