Smith begins by describing the low-lying lands beyond the Lower Escarpment, the edge of the Vale of Melksham, which he says must have been unfit for human habitation in Early British times. "Even now, though carefully drained, and the streams which rise at the foot of the hills confined within their own proper channels, they are, for the greater part of the year, of a spongy swampy nature; as the names Calne Marsh, Marsh Lane, Hill's Marsh, &c, sufficiently indicate; but when undrained they must have been little better than a continuous morass or quagmire."

Square 6:
a. On the brow of the down, overlooking the vale, stands one solitary barrow, just within the precincts of the park at Compton Bassett: it is of moderate dimensions, bowl-shaped, and appears never to have been opened: it is planted with trees, and the wood in which it stands is in consequence marked in the Ordnance Map "Mount Wood". 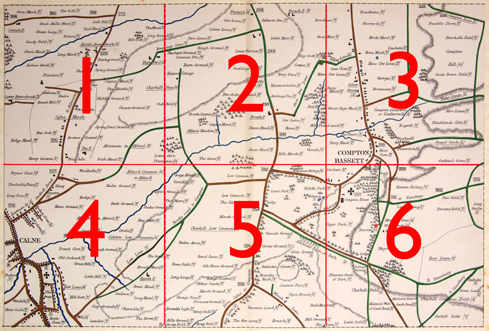